We use cookies to improve the usability of our site and make our online services more relevant to you. By continuing browsing our site, you agree to our use of cookies.

In 1869 Adalbert Fritz founded Schmiedefeld am Rennsteig in Thuringia Wald. When his son, Franz Fritz, entered the company, the name was changed to Adalbert Fritz und Sohn, abbreviated to AFRISO.

The abbreviation AFRISO became known worldwide as a trademark for temperature and pressure measurement technology.

From the 1920's, the AFRISO world changed with a small, thin, circular, thin-plate with lid. Two diaphragm halves formed a capsule spring that could be stretched or shrunk in any pressure.

Low pressure gauge, blood pressure gauge and temperature regulator became the most important sales products until 1945 and at the start of the operation thereafter.

After the Second World War, Franz Fritz and his son Georg rebuilt the company in Kleingartach and Güglingen / Württemberg.

For safe storage of oil products, overflow protection and leakage monitoring systems were developed. Technology for environmental protection became the main focus of the product range and AFRISO became the market leader in this sector.

The beginning of the 60's became the start of the internationalization of Afriso through the founding of its own distribution and production partners in almost all Western European countries. 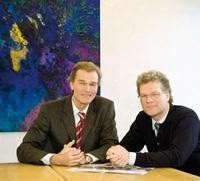 For almost two decades, it is now the fourth generation of Fritz, who is today leading the business. We know the prerequisites for running a traditional, family-run, medium-sized company.

For our customers, suppliers and our employees, we will continue to be a reliable and predictable partner in the future.

The history of Ema

Afriso is a family company founded in 1869, which is today run in the fourth generation. Ema Instrument was founded in 1971 by Hans Sigstedt. Operations were initially transfusional donors for the recently statutory overfill protection for petroleum products. Supplier was Ema's partner in Hamburg, Fafnir company.

In the same year, Ema develops its own level control system, Ema Signal Byggsten - a universal system that can be used for many functions, such as starting and stopping pumps, giving full and empty alarms, etc, and only by switching the thermistor to a capacitive sensor to use the system Indicate oil and grease layers in gasoline, oil and grease separators.

In 1988, we are starting a venture on gas-fired gas-explosives. This effort will soon be extended to include poisonous gas, especially hydrogen sulphide. Our main supplier is English Neotronics.

In 1994, Ema became a wholly-owned Afriso company, when Afriso takes over Sigstedt's shares in Ema. Jonas Ericson-Nihlstorp, who has worked in Ema since 1991, will be CEO. So in 2000, Ema changes its name to Afriso Ema AB and also takes over its former partner Egomax, thus acquiring a complete heating department.

In 2007, Afriso Ema Mark acquires land in Arlöv and begins plans to build a separate property. In August 2009 the large modern property is ready and the floating glass goes from Singelgatan in Malmö to Kilvägen 2 in Arlöv.

In 2015, EXAC Industriteknik AB will be acquired and Afriso will therefore be one of the market's most complete and strong product ranges in level monitoring.

The history of Afriso